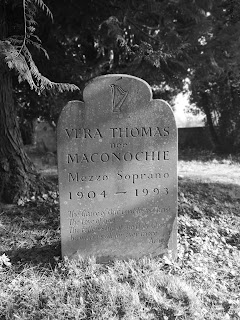 Spotting the intriguing gravestone of mezzo soprano Vera Taylor (nee Vera Maconochie) in Isfield led me down an internet rabbit hole that revealed her to have been a star of stage and the burgeoning TV industry of almost a century ago. Born in 1904, Vera Elizabeth Jean Maconochie was best known for performing in a 1930s show called Old Song Pictures, in which she and Guelda Waller dressed in period costumes to sing traditional folk songs, carols and other music. The idea came to them when they were in the cast of The Beggar's Opera at Hammersmith's Lyric theatre a few years earlier. Guelda and Vera toured internationally and were among the first people to appear on television, as well as being featured on BBC radio between 1930 and 1940. One of her concerts even gets a mention in Keith Stuart's historical fiction 'The Frequency of Us'. In 1944 Vera founded the Uckfield Music Club, which still exists today. She had three siblings:
Vera died in 1993 and is buried in the churchyard of St Margaret of Antioch in Isfield.
Posted by Mark Bridge at 4:03 pm No comments:

There's a good perspective about artistic freedom in Tim Minchin's recent feature for The Guardian:

I grew up in Perth, Australia. It’s one of the most beautiful cities in the world, but being small and isolated, its arts scene doesn’t sustain a hell of a lot of artists. It also isn’t a place from which the path to success is very clear. It was so unclear to me that I never really thought about it. Everything my friends and I did was for its own sake. We weren’t making art in the hope of being spotted by a talent scout or a movie producer, as there were none, and this afforded us incredible freedom. Not just the artistic freedom to make whatever the hell we wanted to make, but freedom from thinking of our plays and gigs as a step on a ladder, or even a viable way to make a living. Freedom from self-pigeonholing.

A recent post from the ever-encouraging Austin Kleon (go on, sign up for his newsletter!) pointed me towards Tim Kreider’s essay on 'The Referendum':

...a phenomenon typical of (but not limited to) midlife, whereby people, increasingly aware of the finiteness of their time in the world, the limitations placed on them by their choices so far, and the narrowing options remaining to them, start judging their peers’ differing choices with reactions ranging from envy to contempt.

This prompted me to revisit Richard Ford's memorable paragraph from Independence Day, in which he writes

Joe may be verging on a major disorientation here - a legitimate rent in the cloth. This actually appears in textbooks: Client abruptly begins to see the world in some entirely new way he feels certain, had he only seen it earlier, would've directed him down a path of vastly greater happiness - only (and this, of course, is the insane part) he inexplicably senses that way's still open to him; that the past, just this once, doesn't operate the way it usually operates. Which is to say, irrevocably.

But, as Tim Kreider says:

One of the hardest things to look at in this life is the lives we didn’t lead, the path not taken, potential left unfulfilled. In stories, those who look back - Lot’s wife, Orpheus and Eurydice - are lost.

Cooking is all about preparing and assembling the best ingredients. That’s a point often made by Shane the Chef, the animated character who regularly appears on the child-friendly Milkshake! segment of Channel 5. But, much like his recipes, Shane himself is a fascinating fusion of assorted elements, as is his home town of Munchington.
First, take your main ingredient: a young spiky-haired man inspired by a combination of ‘rock star’ TV chef Gary Rhodes and the son of co-creator Andrew Wildman. Give him a head of spiky hair, a sadly absent wife and a video-savvy daughter. Next, add the voice of Russell Tovey, infused with the essence of Jamie Oliver and sprinkled with a hint of Shane Ritchie.
Now place your mixture in a shop from the Cotswold market town of Chipping Norton – it’s Jaffé & Neale, in case you’re planning a pilgrimage – and transplant it 200 miles away into the Cornish fishing port of Mevagissey. Time for the final flourish: rename your port as the fictional town of Munchington, turn your shop into a restaurant – it doesn’t need a name, such is our man's reputation – and you’re ready to meet the upbeat protagonist of ‘Shane the Chef’ (as whisked into existence by Andrew Wildman and Simon Jowett with Hoho Entertainment, Cloth Cat Animation and some extra cash from Creative Europe).
Posted by Mark Bridge at 12:49 pm No comments:

Appearances can be deceptive. I have, albeit superficially, the look of someone who might be a runner. In my own imagination, at least. This leads me to believe I'll find running relatively easy. After all, I enjoy a walk. The more I think about it, taking up running begins to makes sense to me, particularly when I factor in (a) a desire to improve my general fitness, given that I have a fairly sedentary job, (b) a desire to maximise my lifespan, given the unlikelihood of a second chance, and (c) a desire to stay awake in the evening but to stay asleep at night, rather than the reverse.

I put on my new trainers, my new running trousers and an old t-shirt, then set off at what seems a sensible jogging pace. This is good. My joy lasts for two or three minutes before I run out of breath, at which point any pleasure is replaced by despair. I recover my breathing and try again. Run. Despair. Recover. Repeat. That's not a slogan anyone's going to put on moisture-wicking clothing. Most of my run becomes a walk, although I break into a jog at the end of my road in case the neighbours are watching.

Breathing, I'm later told, is not as instinctive as I'd thought. (Running tip #1: talk to someone about your challenges.) Concentrating on my breathing as I run - in for three or four paces, out for three or four paces - makes a dramatic difference. It also gives me something to focus on: I can't listen to podcasts because I can't concentrate on the stories, while my favourite music tends not to have the right number of beats per minute. Curating a playlist of perfectly-timed but otherwise uninspiring tunes doesn't help as much as I'd hoped.

Despite the disappointment, I'm getting faster and fitter. I don't notice the speed when I'm running - every run feels like potential failure, as I will myself not to walk home instead - but the fitness app on my phone offers regular congratulations on quicker times. It feels a bit like being back at school, having a teacher praise you for something you'd not wanted to do and didn't care about.

I'm still waking early, which means I can have an early run without a potentially embarrassing audience. I learn that interval training - sprinting and then walking - doesn't suit me. Feels like more failure. The first few seconds of running are okay, but then the despair sets in. Isn't this supposed to be packing me with euphoric endorphins? At least I'm partly distracted from the misery by counting my breaths. Back home, I still lack joy. There's usually a moment mid-morning when I feel energised, when I feel I could do it all again. That's when I enjoy a biscuit with my coffee.

This can't be right. Time for a consultation with Dr Google. 'Run slower', says the doc. Slow enough to have a conversation. Slow enough that you might be embarrassed if you meet a friend. This isn't because you can't run faster. It's because running slower helps you prepare for running faster. Apparently it's all about boosting the mitochondria in your cells. (This is the point when I admit to sometimes confusing mitochondria and midi-chlorians, which belong in the Star Wars universe. "More embarrassing than on a slow training run spotted", as Yoda might say.)

Turns out Dr Google was absolutely right on this occasion. My first slower run takes me up a hill I'd previously failed to finish and leaves me feeling pleased with myself. The next one is the furthest I've ever run. After that, I try a fast run. Grim but my quickest yet. Back to the slow ones and I'm not ecstatic but it's definitely a less unpleasant (or more pleasant, dare I suggest?) experience overall. There may even now be room in my head for a little audio entertainment, especially if I want to hit a specific pace. However, that's for the future. Right now, my phone tells me my biggest challenge is maintaining those slower speeds and not getting gradually faster - and that, it strikes me, is not a bad problem to have.

There's a disconcerting maze of upturned supermarket trolleys at the end of the car park, providing a combination of guidance and protection for waiting customers. I'm queuing in the fresh spring sunshine, money in my bank account; through the shop window I can see food on the shelves, staff inside wiping every shiny surface with sanitiser. Things could be much worse. And yet the man in front of me is coughing. He's a good three metres away, but is that enough? I'm pretty sure I can smell his aftershave, so I'm probably breathing the same air. The woman behind me is much closer. Too close. Might she sneeze on the back of my head? Would it matter, as long as I don't clean my neck with my lizard tongue? We shuffle forwards whilst maintaining our distances. As I reach the front door, I'm met by a security guard wearing a fluorescent waistcoat and a ginger beard. "You alright?", he asks casually, desperately hoping I'm not going to answer anything other than "yeah, good, thanks". "Yeah, good, thanks", I reply. He nods. I've passed the test. A grey-haired woman leaves the shop carrying two large bags, uncomfortable with her success. The guard makes an exaggerated gesture of welcome; I take a deep breath and walk forward.
Posted by Mark Bridge at 2:36 pm No comments:

Email ThisBlogThis!Share to TwitterShare to FacebookShare to Pinterest
Labels: writing

Furlough. It's become a verb - doesn't everything, eventually? - but originally was a noun used when military personnel were granted time away from their work, often to attend to important personal matters. Usage spread to missionaries, prisoners and government workers before reaching everyone else. The English word first appeared in the 17th century, having migrated from the Dutch verlof. Until recent months, the contemporary meaning usually referred to organisations temporarily sending their staff home without pay until economic conditions improved. Now it's a key word in the UK government's support package for businesses that have been badly affected by the current coronavirus outbreak.

Audio from Wikipedia: recorded message used by the White House telephone switchboard in 1981
Posted by Mark Bridge at 4:14 pm No comments: