The story of St Enodoc's church is relatively well known. Located in the village of Trebetherick, a short wander inland from the sandy beach of Daymer Bay, it's an intriguing destination for visitors to Padstow and Rock. Centuries earlier the wind-blown dunes had virtually swallowed the church until its excavation and renovation in the mid 19th century. These days the site is best-known for being the final resting place of former poet laureate Sir John Betjeman, whose funeral party had to struggle across the adjoining golf course in heavy rain. 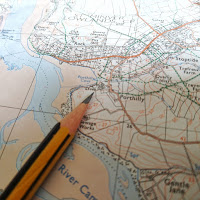 But if you head in the opposite direction - turn right when you get off the Padstow ferry and walk east along the seafront at Rock - you'll find a lesser-known church with an equally fascinating story. And a much gentler walk, too.

In many ways, St Michael's church is the older sibling of St Enodoc. Both are close to the coast, with St Michael's church sitting alongside the shore of Porthilly Cove. Both are within the parish of St Minver and were known originally as the North and South chapels of the parish. Both were restored substantially during the Victorian era. Both even have a similar font; the one in St Michael's is a copy of the font at St Enodoc's. 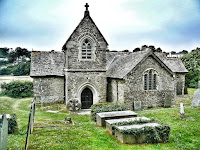 St Michael's was originally built in the 12th century, possibly as a chapel for monks who lived at a nearby farm. The medieval four-holed granite cross outside may be even older; it was moved from the west side to the south side of the church in the 19th century. Today the church is generally a quiet place, hosting Sunday services and summer weddings. It's usually open to visitors from around 9am until early evening.