How Lewes bonfire was transformed by the Pope

In September 1850, Pope Pius IX appointed an Archbishop of Westminster and twelve other bishops. This recreated a structure for the Roman Catholic church that hadn’t existed in England for almost three hundred years.

The announcement was seen as hostile by many people around the country. Anthony Wohl, former Professor of History at Vassar College, notes that “several Catholic churches had their windows broken, and ‘No Popery’ processions were held throughout England”. 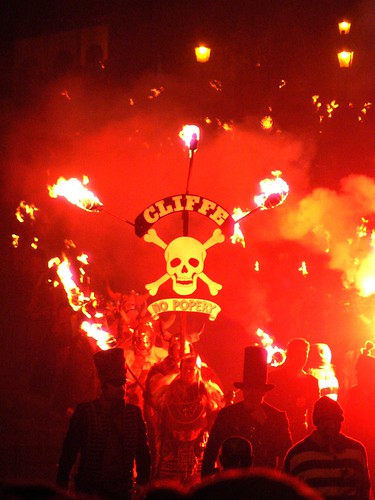 Effigies of the Pope and Cardinal Wiseman (the new Catholic Archbishop) were burned in Lewes outside the White Hart. In an opinion piece about bonfire celebrations, The Sussex Advertiser of 12th November 1850 (quoted by Brian Pugh in Bonfire Night in Lewes) said “since Dr Wiseman’s insolent usurpation the celebration of this anniversary has partaken to a much greater extent than formerly of an anti-Romanist character; and the substitution of the Cardinal for the almost forgotten Guy Fawkes seems inevitable.”

It’s around this time that ‘bonfire bishops’ started to make an appearance, writes Brigid Chapman, in Night of the Fires. “Soon they were preaching patriotism as well as Protestantism, and getting lots of column inches in their local newspapers as a result.”

Jeremy Goring, in Burn Holy Fire, points out that a Sussex Express article about the 1850 Lewes bonfire celebrations mentions a memorial tar barrel “ignited in sight of the spot where the papists were wont to light the faggot and burn to death their unyielding Protestant brethren”. He says this is the first time the paper had mentioned the martyrs of 1555 in connection with the town’s annual bonfire night.

However, he questions the timing of this interest in the Sussex martyrs. “Contrary to what the Sussex Express reporter maintained”, writes Jeremy Goring, “the strength of anti-Romanist feeling in Lewes probably had less to do with the past cruelties of Catholics than with the present activities of Anglicans.” He goes on to say “It is significant that the protests against the restoration of the Catholic hierarchy, culminating in a great bonfire in Lewes High Street, first took place at the very time when Frederick Teed, rector of nearby St Michael’s, was introducing what many regarded as reprehensibly ‘popish’ practices.”

This hostility towards Anglicans demonstrating any affection for 'high church' or Roman Catholic rituals was particularly obvious in the 1857 'Lewes Riots', which centred on the funeral of Emily Scobell. Emily was the daughter of the Rev John Scobell, rector of All Saints and Southover churches. Although her father's views were evangelical, she'd left home to join an organisation at the opposite end of the ecclesiastical spectrum: the Society of St Margaret, a Sussex-based religious group that worked to nurse the sick. This group had been set up by John Mason Neale, an Anglican clergyman who was often seen as pro-Catholic. Miss Scobell, who died after catching scarlet fever from a patient, had wanted to be buried alongside her mother at All Saints church. Her body was brought to Lewes by the Rev Neale and a group of eight sisters of the Society of St Margaret, who were met at Lewes railway station by a crowd shouting 'No Popery', according to Brian Pugh in Bonfire Night in Lewes.

After the funeral service, the congregation moved outside the church to the family vault in which Emily and her mother were buried. At this point the crowd became increasingly angry. "The nuns' habits were torn and Neale lost his cassock", notes Lewes History Group. The Rev Scobell described events from his perspective to The Times: "I was myself knocked down, and for a moment, while under the feet of the mob, game myself up for lost". Fortunately all nine left Lewes safely that evening, but not before half the group had been besieged in the King's Head pub for almost an hour.

Perhaps unsurprisingly, an effigy of John Mason Neale was paraded through Lewes during the following year's Bonfire processions.
Posted by Mark Bridge at 4:34 pm